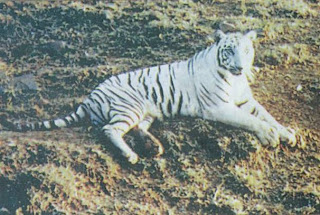 In 27th of May 1951, Maharajah Martand Singh of Rewa caught a white cub. At the time of capture it was approximately 9-months-old and lived in captivity at the Maharajah's summer palace for another five years. The tiger was then stuffed and sent as a gift to King George V as a sign of India's loyalty to the crown. To this day white tigers are still kept at the Maharajah's summer palace which is located at Govindgarh.

Posted by DEVRISHI TIWARI at 2:45 AM